Here in Toronto, I start looking for Galanthus nivalis, (Milk-flower of the Snow), the common snowdrop, in mid-December. Tips are visible whenever the snow melts. I expect to see the first flowers in mid-January, though they may not appear till the end of February. Those in colder spots may not open until late March. There are now thousands in our garden so we have flowers from February to May. 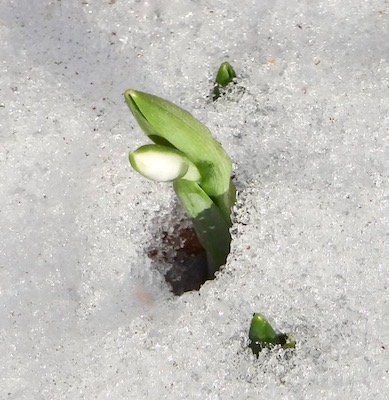 Galanthus nivalis is native to Europe. Two thin grey-green leaves grow from each bulb. A leafless flower stalk can be up to 15 cm high with a dangling white “bell”. The three outer tepals are like long thin spoons. The three inner tepals are much shorter and are not curved. They are characteristically marked with a greenish U over the terminal notch. 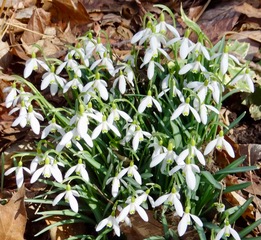 There are many hybrids and cultivars although there are only 20 species. Galanthophiles will pay $1000s for a new form with different markings. I am content with a few distinct forms.

G. nivalis F. pleniflorus 'Flore Pleno' grew on an ivy-covered bank close to my home in England. Cut flowers were thought to be unlucky in the house. However, we gathered bunches to sell for church fund raising. These bulbs were planted about 1900 and made a fine show as we walked past after our wedding in 1965.

I have some clumps of double snowdrops here which are rapidly bulking up. There are 5 or 6 outer tepals and many inner ones.

At first glance, Galanthus elwesii, the giant snowdrop, appears similar, though larger. It grows up to 25 cm tall and the wider leaves fold around each other. The inner tepals have green tips and bases. The amount of green varies considerably. 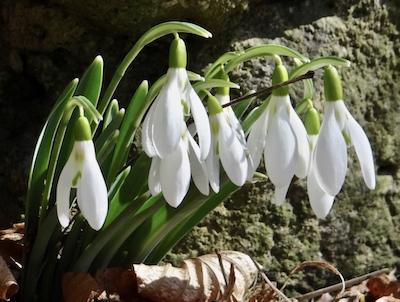 Some I grow include: 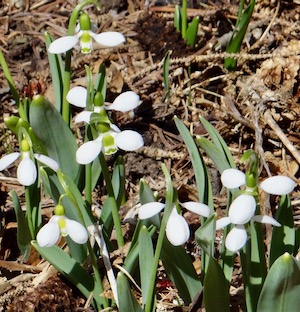 Snowdrops with yellow markings on the tepals and a yellow ovary are sought-after forms. I have some. However, is the yellow caused by a mineral deficiency or lack of light? I will be excited if they stabilize. 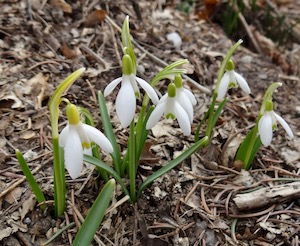 Galanthus elwesii var. monostictus flowers in November. The tepals look more like G. nivalis. This is in my alpine house till it bulks up. One of our members has G. elwesii Hiemalis Group which flowers outside in December.

Cultivation: Plant the bulbs as soon as possible in the early fall. They do not like drying out so first soak them in warm water for a few hours. Deciduous shade and woodsy soil is best though they will tolerate some sun and heavier soil in Southern Ontario. For the earliest flowers, plant in front of a south-facing basement window. The leaves are not attractive after flowering. They soon die down. Hosta and fern leaves hide these. Clumps of Hemerocallis planted on the south side of your snowdrops also make the leaves less obvious.

Propagation: Seed needs to be fresh sown outside and kept shaded and damp. Some will germinate the following spring. I have self-seeded clumps in the lawn. Divide large clumps after flowering “in the green” with the leaves still healthy. Replanting 5-6 bulbs together works best.

I would like a form with nearly all green flowers, also a better yellow and one with really green tips.

A must for snowdrop fanatics: Galanthus Group This email address is being protected from spambots. You need JavaScript enabled to view it.