Dodecatheon pulchellum has unusually shaped flowers that stand out nice in the garden. It is hard to find in nurseries but easy to raise from seed. 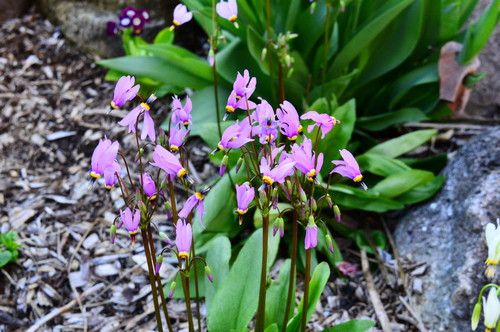 The information in this post is for D. pulchellum, but I can’t be certain the pictures are of that species. The seed was obtained from the ORG&HP society seed exchange, labeled as D. jeffreyi, but I think that name is incorrect. Dodecantheon species are all very similar, and even D. pulchellum is quite variable. The pictures may also be a garden hybrid. In any event all Dodecatheons are great plants.

I have always grown it on the wet side, but maybe I’ll try a dry scree garden. If they get too dry they will go dormant in late summer. Divide as they go dormant or in early spring. It is in the Primulaceae family. The most common color forms are light to deep pink, but white and red forms are available.