Plant of the Month for December, 2018

Primula veris is best known as the common cowslip. With a name like that you would think everyone grew it, but it's not common in gardens or nurseries which is really odd since this is a very easy to grow primula that sparkles every spring. 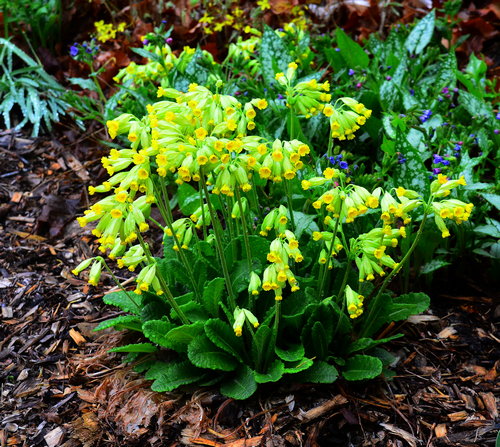 The cowslip starts to grow very early in spring and flowers mid to late spring. If it gets enough water it will stay green all summer, but if things get too dry it just goes underground in late summer until next year. It is probably the easiest primula to grow and seems very long lived. It quickly forms a large clump that can be divided every three to four years. You will also get some limited seeding.

The only negative about this plant is that the flowers are funnel-shaped and don’t open as much as some other primulas. To compensate, it produces a lot of flowers on each plant. The natural color for Primula veris is a lemon yellow, but cultivars exist in other colors. The cultivar Sunset Shades comes in yellow, russet, red and even some bi-colors.

This plant is easily confused with Primula elatior , also known as the oxlip primula. The cowslip has flowers that face in several direction while the oxlip has flowers that all face in one direction. The leaves on the two plants are also different. The cowslip is ovate with the widest part at the base. The oxlip has the widest part in the middle of the leaf.