Hamamelis x intermedia 'Arnold Promise' is one of the most popular witch hazel cultivars, but that still makes it an uncommon plant to see in the garden. It is a small vase-shaped tree that can be kept quite small with pruning, so it will fit into any garden. It can even be grown as a small potted plant or bonsai. 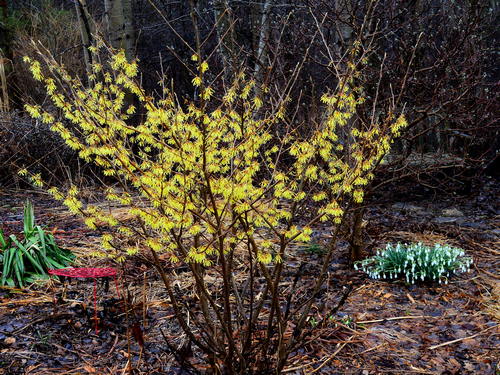 Witch hazel cultivars are difficult to propagate and are normally sold as grafted plants. H. x intermedia is usually grafted on the North American native, H. virginiana which commonly suckers. These need to be removed in order to maintain the cultivar.

Video showing you how to remove suckers

In my alkaline, clay soil, they are slow to establish themselves, but they don't seem to have a problem in these conditions. H. virginiana blooms in late fall and H. x intermedia bloom in late winter. Arnold Promise is one of the last to flower and usually flowers when there is still snow on the ground. The foliage turns an attractive yellow-to-orange color in the fall.

Witch hazel wood is used for dowsing, also called witching, a method used to locate water. You hold a Y-shaped branch as you walk across the ground and when it points down you have found underground water. A friend of mine, that drills wells, told me that he always carries such a stick in his truck. Some customers will only drill if he witched the land to find the water, so he would go through the process to keep them happy. Although this belief is held by many, it is a complete myth and has no scientific basis. 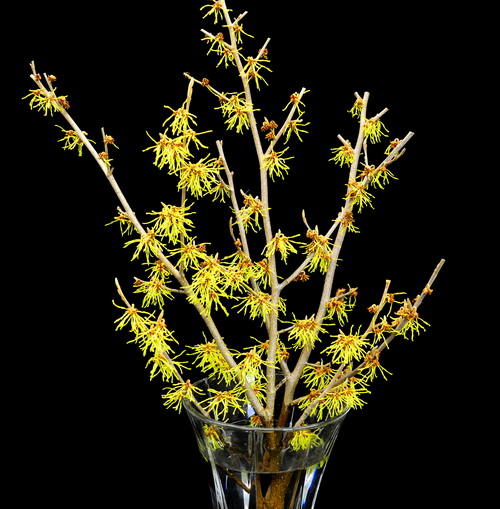 I brought some stems in the house this winter and was amazed as how well they did. It only takes a few days for the flower buds to open and they last about 2 weeks. I think I actually prefer them as forced branches rather than leaving them outside.

Video showing you how to force branches