Are you interested in growing a bulb that few others are growing? Do you want to eat the surplus bulbs as they grow? Do you want a bloomer in late spring, in that void between spring gluttony and summer excess? If so, then Camassia leichtlinii is for you. 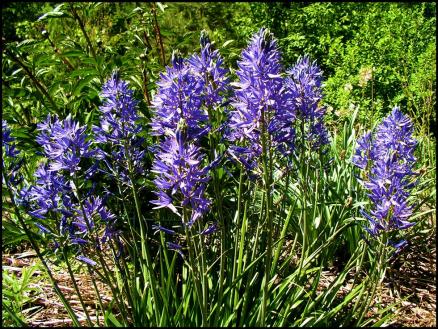 C. leichtlinii blooms at a time when the garden is lacking colour; that void between spring and summer. Flowers are blue or creamy-white and make a conservative statement in the garden. After flowering the leaves die back, so it is best to place the plant in the middle of the bed so other plants can hide it as it goes dormant in late summer. Once it is planted it takes no care at all. It dies back in summer and by spring there is nothing to clean up.

Known also as Leichtlin’s camass, great camass, or large camass, C. leichtlinii is a North American native that is easy to grow from bulbs which will spread very slowly. It can also be grown from seed, but seed takes 3-4 years to flower.

There are two subspecies. Subsp. leichtlinii is the blue version, and subsp. suksdorfii is the creamy-white one. The latter is sometimes incorrectly called an ‘alba’ form, and incorrectly described as white flowering. C. Leichtlinii is the tallest of the 6 Camassia species. A dark blue cultivar named ‘Blue Danube’ also exists. 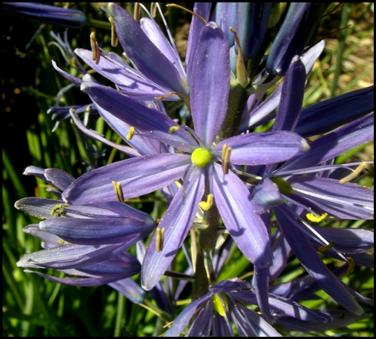 Camassia quamash is a similar plant and the two are mixed up in the trade and hybrids between the species exist. C. quamash is said to be shorter (35-60 cm), and when in bloom it has 5 tepals curved up, and the 6th curved down. The tepals of C. leichtlinii wither after the bloom and twist together to cover the developing fruit. I can’t confirm these differences, but maybe someone reading this can check their plants this year and confirm it for us.

"I never have met with a white person who was not fond of baked cammass [sic], and I do not know any vegetable, except fried bananas, so delicious.--James Swan 1857, 19th Century ethnographer and naturalist. This Quote was taken from http://arcadianabe.blogspot.ca/2012/06/how-to-cook-camas.html. Not sure how good they taste, but they have been eaten by native peoples for centuries.

Water: moist in spring and dry is summer