Cymbalaria muralis is a very short ground cover that grows in sun or shade. It makes a nice matt of leaves and blooms most of the summer. In mid-June it produces the most flowers to make a nice display. The flowers are very interesting but so small that you need to get up close to appreciate their detail. 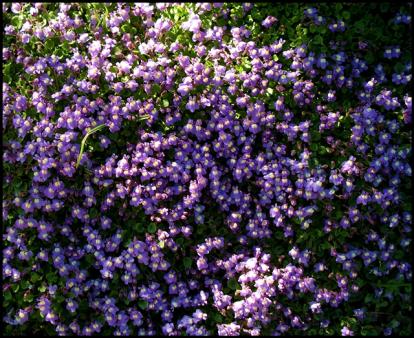 Its common names include Kenilworth ivy and ivy-leaved toadflax. It is known for its ability to grow in small cracks in walls. This plant spreads a bit too much for a rock garden, but it works great in a bed containing larger plants. In such a situation it covers the ground under other plants and peeks out in the spaces between the other plants. It works especially well under shrubs. Larger plants will outcompete Cymbalaria muralis.

C. muralis spreads by runners which root along nodes as they grow. It is described as a vine, but it is so short that it does not grow up very well. It is mostly a ground hugging spreader. It’s propagation by seed is unusual. The flower stalk is held above the leaves moving towards light. Once the flower is fertilized the flower stalk becomes pendent moving away from light. This helps force the seed into dark crevices on the ground or in rock walls. 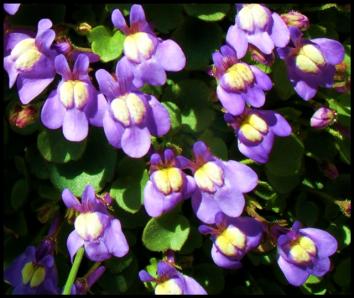 Cymbalaria aequitriloba is a very similar species but the plant and flowers are smaller. One description said that the yellow colouration in the throat of the flower is not present in this species, but is present in C. muralis. C. aequitriloba may have slightly hairy leaves.

Bloom Time: May to September