Plant of the Month for December, 2015

I don’t normally include biennials as the Plant of the Month since they are just too much trouble to keep going in a garden, but Glaucium flavum is going to be an exception. Besides large yellow or orange flowers, the horned poppy has one of the most unusual leaves I have ever seen. 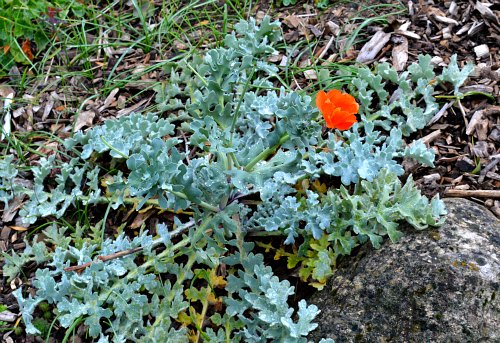 The soft looking, blue-gray leaves are very unique and make a great addition to a rock garden. As a young plant it grows a rosette with leaves close to the ground, as pictured. As it gets older it becomes more upright. The plant likes a sandy, lean soil, but seems to also do well in normal garden soil.

I received my first plant as a small seedling from a friend. It didn’t grow very big, probably because it did not like being transplanted, as is the case with most poppies. It did flower, made a bit of seed, but never came back after the winter. Now, four years later, the plant in the picture showed up as a seedling from that original plant. 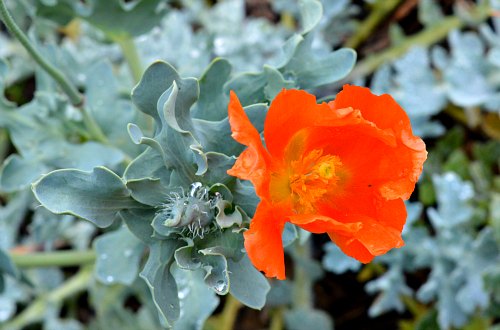 The plant in the picture is named Glaucium flavum var. aurantiacum or Glaucidium flavum f. fulvum. It looks exactly like Glaucium flavum except that the flowers are orange and is commonly called the orange horned poppy.

Glaucium flavum has naturalized in several states and in Ontario. In Massachusetts it is classed as an invasive and is prohibited from sale.

Life Cycle: biennial (some say it is perennial)