Plant of the Month for February, 2017

Pulsatilla are great rock garden plants and any species or cultivar will make a good addition to your garden. They all flower early, and then produce lovely hairy seed heads. Pulsatilla styriaca is one of the earliest pulsatilla to bloom. 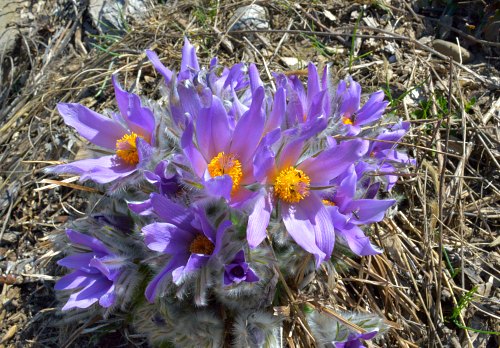 The plant in the pictures was grown from seed obtained from our own SeedEx about 6 years ago. Since the seed is garden collected the name many be incorrect and it may also be a hybrid. Many of the pulsatilla look very similar and it is difficult to ID them correctly at the species level. In the case of P. styriaca there is still some debate about its true species status.

My plant is situated in a very dry location above a good-sized rock, in full sun. This gives it good drainage and allows the flowers to show their best. It seems very happy in this location, but I also grow other pulsatilla in normal garden soil and they also do well. As you can see from the picture below, these plants are a good source of early spring pollen for insects. 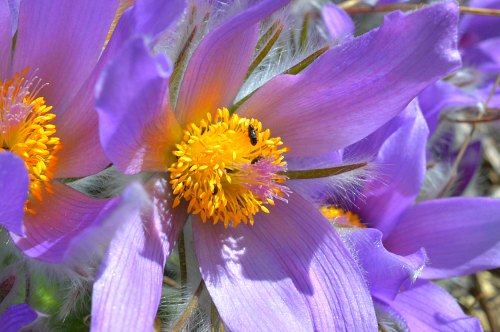 The common name for pulsatilla is pasque flower (pronounced pask). The plant forms a tap root and is notorious for being difficult to move once it is established, but moving seedlings in pots does not seem to be a problem. Because of this reputation I have been reluctant to move mature plants. Last year I had to move a Pulsatilla halleri, and it transplanted with no problem. I even split part of the root off and grew it as a cutting. Maybe they are easier to move than reported? If you must move one, do it after it has set seed and dig out as much of the tap root as possible.

I find the purple colored pulsatilla easy to grow from seed, but I have had trouble with some of the yellow ones. They germinate well, but once they are a few centimeters tall, they die back. Others have reported similar observations. Fresh seed of both types is reported to germinate quickly, but older dry seed may need a cold spell to break dormancy. 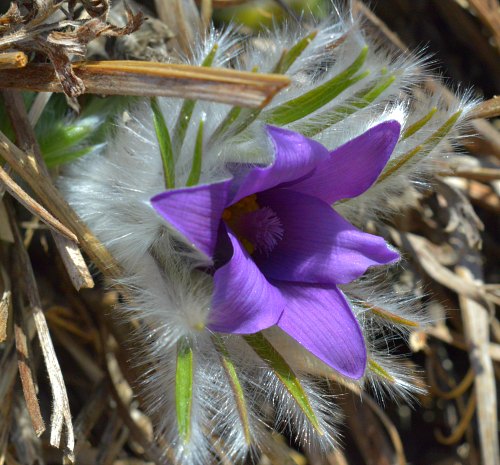 Seedex availability (ORG&HPS annual Seed Exchange): occasionally (there are always some pulsatilla every year - this species is a bit rare)

Sow immediately. The viability of these seeds is short or the species propagates best with fresh seed. Stored seed might be coaxed into germination with temperature cycling and patience.
Sow @ 20°C. Seed germinates within 3 months.
It has been proven that removing tails is not necessary
Robert Pavlis