Iberis simplex is an easy to grow alpine that forms a lose bun and flowers a long time. It is a great addition to a rock or scree garden. 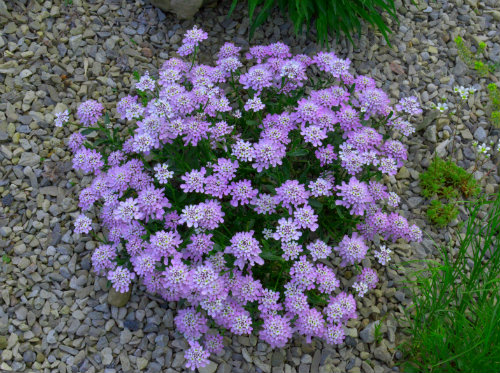 The one pictured here was grown from seed obtained from NARGS through their seed exchange program. I have tried several Iberis and they all seem to be easy to grow from seed.

The whole genus is commonly called candytuft but not because they taste sweet. The name is derived from Candia, the former name of Heraklion on the Island of Crete.

Each flower head consists of numerous flowers which open in succession, accounting for the long bloom display. I. simplex is smaller than some other candytufts but if it gets too large for the space, take cuttings, or layer some stems and start a new plant.

Deer have left this plant alone, but they have eaten other candytufts in the main garden.