Plant of the Month for February, 2022

Eranthis hyemalis, the winter aconite, is an early bloomer, heralding spring. It often flowers through the snow, soon after the first snowdrops. 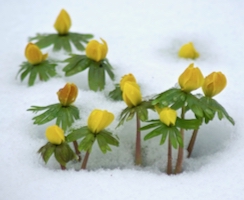 Eranthis in the Snow 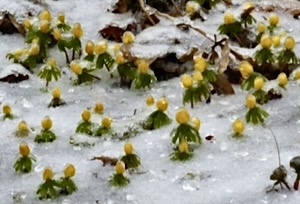 A curved stalk drags up a flower bud, surrounded by finger-like bracts. It straightens, opening to a 5-8 (usually 6) sepalled yellow cup above a ruff of bright green bracts. Petals are reduced to nectaries. Central follicles are surrounded by numerous stamens. Leaves, similar to the bracts, grow up as the flowers mature.

I remember a patch several metres wide in  England when I was a child. My Grandmother planted them in the 1920s. They were still there in 2009!

Other Species and Cultivars:

There are eight species and many cultivars. These include:

Eranthis x tubergenii is a hybrid between these two species with larger, sterile flowers

Eranthis hyemalis ‘Flore Pleno’ is one of several double cultivars

Bloom time: Late February to April. The leaves die down as shade increases and the soil dries.

Cultivation: Buy tubers in the fall as early as possible. Soak in luke warm water for 12 hours before planting in groups 5-10 cm deep, in deciduous shade to morning sun. They will soon clump up and form a mat. They can grow in a lawn. However, do not mow till the leaves start to wither. 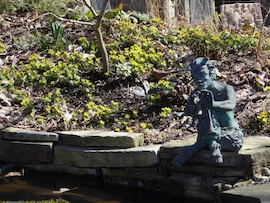 Eranthis self seeding on mound

Water: Do not let it dry out when dormant.

Propagation: Plant “In the green”. Dig up clumps after flowering, divide and replant.

Seeds are recalcitrant.  Direct sow outside as soon as the seeds turn from green to black. They will germinate in the late winter, with the seedlings emerging as the plants flower. They withstand frost.

I have had no success with Eranthis seeds from exchanges.

Notes: It is toxic like all members of the Ranunculaceae. Don’t nibble on the plant! Symptoms of poisoning include vomiting, diarrhoea, disturbed vision and cardiac arrest.

No pests or diseases.

Source of pollen and nectar for early pollinators.

I have 100s of plants, nearly all E. hyemalis. There are a few E. cilicicia or perhaps the hybrid. Dry summers may have reduced the numbers of the later.

I am looking for other cultivars.