Allium moly is an plant that most people do not recognize as being an onion or garlic. It is short with fairly wide leaves unlike most onions. It also has very vibrant yellow flowers. This great garden plant should be in every garden. It grows just about anywhere, sun, shade, wet or dry – but maybe not in a bog. 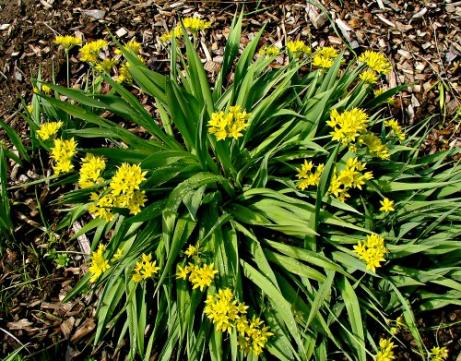 Allium moly does not seed around too much, like some alliums, but it does spread slowly. The bulbs are easy to remove in any area where they are not wanted.

The name of this plant is confusing. Both the Encyclopedia of Life and The Plant List, as well as other reliable sources have two species listed; Allium moly and Allium luteum. But in the trade, both species seem to be the same plant. In fact you can find plants named as Allium moly ‘luteum’ or Allium moly luteum. I guess these last names are used by people who are also confused about the name.

To make the naming more interesting, there is a plant described as Allium moly ‘Jeannine’ which was discovered  in 1978 by Antoine and Michael Hoog. This named cultivar is said to be more vigorous, has yellow flowers instead of the yellow-green flowers of the species, and it has two flower spikes per bulb.  All of the bulbs being sold have a very vivid strong yellow colour.  I have purchased the plant under different names, including ‘Jeannine’, and they all seem to be the same. 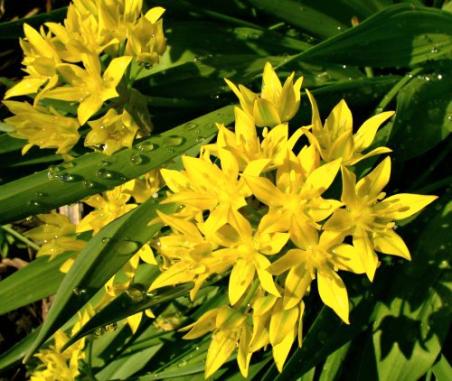 The Encyclopedia of Life has two accepted pictures which show off-white flowers that could be considered to be yellow-green (http://eol.org/pages/1084730/overview).  I wonder if all bulbs in the trade are in fact Allium moly ‘Jeannine’?

Common names include; golden garlic, golden onion, yellow flowering onion or lily leek. All parts of the plant can be eaten, but it is not regarded as a good kitchen onion. Some reports say it is quite mild, and others claim that it has a very strong garlic flavor.

Habitat: badlands, on mountain ledges and in forest clearings, mainly on calcareous soils