Camassia quamash seems to have it all; requires no maintenance, flowers blue after spring bulbs but before June perennials make a show, is not bothered by pests, is a North American native and you can even eat the bulbs. What more can you ask for in a plant?

The one in the pictures was grown from seed obtained from the ORG&HPS Seedex program. It took a couple of years to bloom, but once planted I have not touched it. It just does its thing year after year, without maintenance, watering or fertilizing.

Flower colour is usually a light violet blue, but the cultivar ‘Orion' is a deeper blue, and C. quamash ssp. maxima, known to gardeners as Puget Blue (not a cultivar name), is more robust and has more flowers per stem. The cultivar ‘Blue Melody’ has variegated foliage but since this species dies back after flowering it is hardly worth growing for the variegation.

The bulbs have contractile roots which will move the bulb lower if you plant them too high. 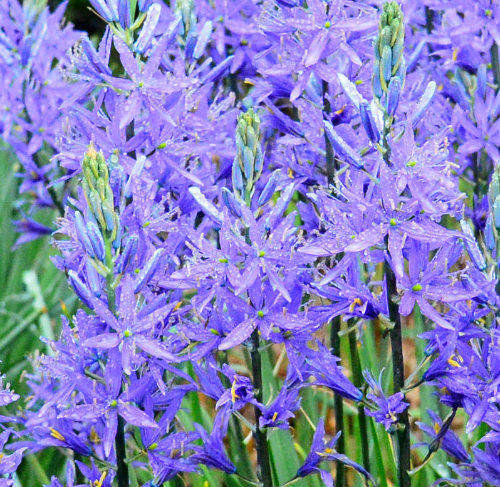 The plant in the picture was grown from seed labeled Camassia esculenta, an old name for Camassia quamash, but it might not be the correct name. It could be Camassia leichtlinii which looks very similar. The true C. quamash has slightly irregular flowers, with tepals that wither separately. C. leichtlinii has regular flowers where the tepals twist together after flowering. It also tends to have more flowers per inflorescence. Both species are quite variable which has led to the naming of a variety of subspecies. My C. quamash flowers later than my C. leichtlinii suggesting that they are different species. In any case, this is a great garden plant, but you may not need to have both species since they are quite similar.

Water: prefers moist soil but will grow in a normal garden

Contributions to this page were made by: Robert Pavlis